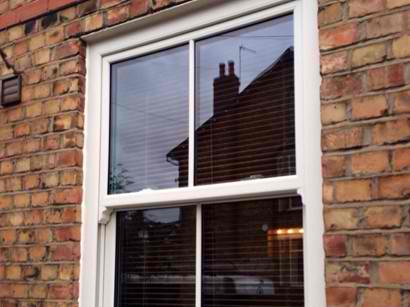 We Installed Upvc Sash Windows in Heaton Mersey Manchester for a customer who after doing a google search for Sash Windows in Manchester came across us. She loved the pictures on our website of the sash windows & the general feel for our company so decided to give us a call.

They wanted sash windows to keep the original look of the house as the windows that were in at present had been changed from the original box sash to softwood casements & didn’t do anything for the look of the Victorian terrace.

They lived in a conservation area so thought it would be best to contact the local planning department to tell them of their plans to change the windows back to their original appearance the only minor change being the windows would be plastic not wood don’t forget that the present windows were already out of character. The council got back to them with a list of requirements that were needed before they would agree to the customer having new windows.

Basically they wanted the customer to have sash windows in the original style. Great, done deal! Well, not exactly, the windows had to be Wood now the cost of wood was over double the cost, less efficient & needed more maintenance so why would they insist on it even though the current style of windows were so out of character & here is a customer trying to get back to the original style & being told no.

We got in touch with the conservation officer & had a long chat & explained what the customer was trying to achieve & that they were making them more authentic than the current ones. We showed him the Upvc Sash windows we use from Bison Frames & images of previous jobs & to ours & the customers delight he agreed for us to change the windows to Upvc Sash Windows.

Now the windows look like they would have originally & they’re massively more efficient & in the customers budget. We also installed a 1930s style high security Rockdoor.

We believe if you use the right product wether it be plastic or wood it can still look right. Bison have recently launched a new Upvc sash named genesis that is even closer to the real thing it may be closer than wood itself.

Please take a look at the before & after images here and see if you agree.

PVCu can suit Grade II!
PVC-U and Grade II can go together