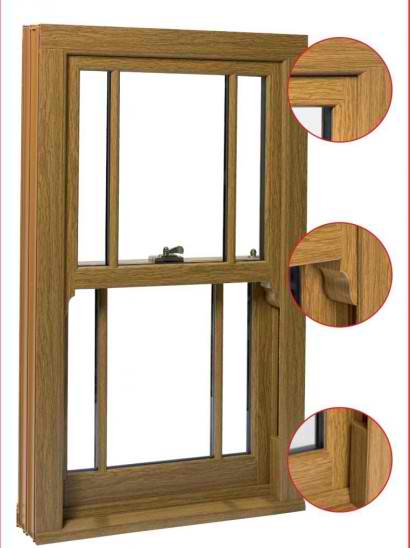 For many homeowners, when it comes to windows, PVC-U has become synonymous with energy efficiency. This is a testament both to our industry’s innovation in developing such advanced products and to intelligent marketing that has succeeded in embedding the concept in homeowner’s minds. Unfortunately for some properties, the choice of window can come down to the material they are made from rather than practicality, energy efficiency or aesthetic appearance.

Nowhere is this more true than for owners of period homes especially those with listed building status or in some conservation areas. However, the PVC-U industry has come on in leaps and bounds in recent years and the new generation of heritage-look windows increasingly offer authentic traditional style that sits well in period settings with all the added advantages that PVC-U can offer over timber. Yet despite the advances, the general consensus is that when it comes to Grade II listed properties and dwellings in some conservation areas, PVC-U is often a no-no and timber is seen as the only acceptable material.

This is something that we’ve wanted to challenge for a long time, so when we were approached by the owner of Russet Cottage, an 1830s Grade II listed building in the Beardwood area of Blackburn to replace the windows with our standard welded PVC-U vertical slider we knew we were in dangerous territory but we also knew we had to take this opportunity to make some changes.

Working with our client, we sought the advice of the planning officer right from the start. We took time to understand what could be done to follow their guidelines so the significance of the listed building would not be harmed as well as listen to the objections to using a PVC-U product. By listening carefully to the planning officer we soon realised that some of his objections were more than valid, expressing his concerns towards the detail of the mock sash horns on a standard PVC-U vertical slider and the welded joints associated with most PVC-U windows.
Armed with this information, we invested in the development of a vertical slider that would overcome these objections and be accepted or at least considered for use alongside timber in some Grade II listed properties and conservation areas. The result of our combined efforts was the Genesis VS and we are delighted to say that it was accepted for use in Russet Cottage, allowing its owner to benefit from energy efficient, low maintenance windows and period looks.

So how does the Genesis VS differ from a standard PVC-U vertical slider? The biggest difference is NO welded joints. We realised that, although PVC-U vertical sliders had many of the features of a traditional timber sash, by using welded corner joints, they would always look like PVC-U windows. In order to overcome this, we needed to get rid of the welded joint element and replace it with traditional timber jointing methods. After months of research, development and rapid prototyping we eventually commissioned bespoke tooling and injection moulds that have enabled us to create a PVC-U window that uses traditional timber jointing methods. This traditional appearance is complemented with period look, high security cam locks and sash buttons, run through sash horns and a deep bottom sash rail as standard, making the Genesis VS the most authentic looking PVC-U vertical slider on the market.

We are delighted that our PVC-U Genesis VS was accepted with open arms as an alternative to timber in Russet Cottage and it just goes to show that some Grade II listed buildings and conservation areas needn’t be no-go areas for PVC-U. We aren’t advocating that PVC-U windows should be accepted for use in every instance, some properties have been listed because of their architectural and historic importance and deserve to be sensitively restored and maintained. We are saying that high quality heritage-style PVC-U windows such as the Genesis VS should be allowed to stand shoulder to shoulder with timber and considered as an option. The homeowner deserves to have that choice and timber shouldn’t be the only option every time.

We feel so strongly about this that we have started a campaign aimed at English Heritage and local planners to ask them to take high quality PVC-U windows as well as timber into consideration when the homeowner is looking at replacement windows. If you would like to join our campaign, you can sign up at https://you.38degrees.org.uk/petitions/pvcu-can-suit-gradeii. Together, we can open up a new market for our industry, allowing homeowners the choice of PVC-U over timber and to benefit from the advantages that our high quality heritage style windows have to offer.