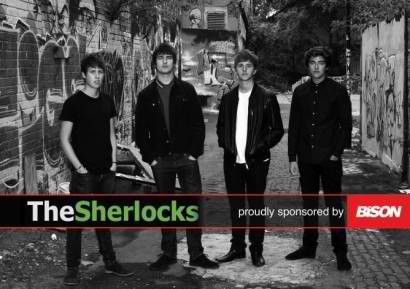 Trade fabricator Bison Frames is a company with strong roots in its local community. So when the opportunity arose to get behind and sponsor the up and coming local band ‘The Sherlocks’, Bison were more than happy to help. Mark Tetley, Bison’s Sales Director, says, “We’re proud to be a company that offers local support and want to see the community thrive. Our growing business means we’re already doing our bit for the local economy and by sponsoring The Sherlocks we can do our bit for the local music scene too.”

The Sherlocks hail from Bolton on Dearne, just down the road from Bison’s HQ in Barnsley. They have already performed over 700 gigs and released their debut single, ‘Live for the Moment’, in October. The tune reached the top five in the iTunes alternative chart – a remarkable achievement for an unsigned band. The band write and produce all their own songs and have a sound that’s described as ‘upbeat’ and ‘bodacious’, with ‘thrashing vocals’ and ‘rhythmic guitars’.

The four piece band consists of two sets of two brothers: Kiaran Crook on lead vocals and rhythm guitar, Josh Davidson on lead guitar, Andy Davidson on bass and Brandon Crook on drums. Mark Tetley said, “They’re a great group of lads who work extremely hard and are always performing sell-out gigs at venues and festivals. The band has got a great future and we’re delighted to be able to help them on their way.”

Bison Frames has a reputation for supporting the next big thing: its Genesis vertical slider is rapidly proving that PVCu can be accepted for use in Grade II listed buildings while its Fold & Glide door system reinvents the concept of bifolding doors. So if Bison’s ability to spot a winning formula is anything to go by, The Sherlocks look set for the big time!