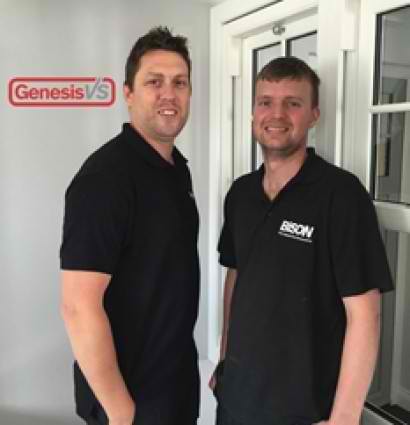 Leading trade fabricator Bison Frames has just announced that Ian Hedley has joined the company as Production Manager.
Mark Tetley, Bison’s Director, said, “We are delighted to welcome Ian to the team. He has a wealth of experience and is just the sort of skilled, innovative and enthusiastic person that’s the perfect fit for us.”

In a further personnel update Bison has announced that Gavin Turner has been promoted to Works Manager. Mark said, “We believe in rewarding excellence. Gavin is a key member of our team and his expertise and knowledge of our processes will be invaluable going forward.”
The appointment and promotion reflect a company that has seen strong growth in recent months, a trend that looks set to continue.
Alongside its core range of windows, doors and conservatories, the company is home to the innovative Genesis product range that has taken the industry by storm.

The Genesis Vertical Slider is the most authentic VS on the market and is ending the belief that PVCu and Grade II don’t go. The Genesis Flush Sash is doing the same when it comes to replacing early nineteenth century casement windows while the Genesis Fold and Slide bi-folding door is a stunning alternative to French or patio doors and offers best-in-class security and design.

Mark promises that the range is set to grow, with further products due to be unveiled soon. So it looks like Ian Hedley and Gavin Turner are going to be involved with an exciting time in Bison’s development. And it probably won’t be long before Bison has reason to celebrate another period of growth!