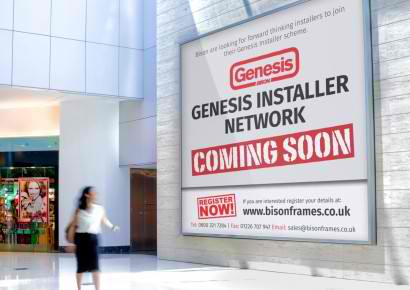 Bison Frames has just announced its plans to introduce a new Installer Network scheme for its Genesis product range. Mark Tetley, Director at Bison, says, “Genesis has taken the market by storm and we’re keen to bring together a team of high calibre installer partners to drive the brand forward and reap the rewards of being an approved installer of such a high profile product range. The network will be live early 2016 and we are now taking registrations via our website at www.bisonframes. co.uk. My advice to any installer thinking of joining is to sign up early and get in on the ground floor of the scheme.”

The range started with the Genesis Vertical Slider. Its mission was to disprove the myth that PVCu and Conservation Areas don’t go and it has more than succeeded in that ambition.

With its stunningly authentic detailing and traditional jointed construction the Genesis VS is a genuine alternative to the timber sliding sash.

Alongside the Vertical Slider is the Genesis Flush Sash, which is the PVCu alternative to early nineteenth century timber casements.

With its exquisitely authentic appearance it’s having a similar impact in the market to the one that the Genesis Vertical Slider is already having for timber sliding sashes.

The third product in the current range is the Genesis Fold and Glide bi-fold door, a stunning alternative to a French or patio door. With its best in class security and design it’s a key component in any forward-thinking portfolio.

The range is set to expand too. “I can’t say a great deal at the moment except – Bison Aluminium,” comments Mark, “But watch this space!”

Approved Installers in the Genesis Network will benefit from homeowner leads resulting from Bison’s consumer advertising campaigns, as well as a wealth of other support to help them grow their business.

Bison is one of the most exciting and innovative companies in the industry today and is enjoying extraordinary success as a result. The Genesis Network will allow installers to benefit from this success.