By Bison Frames on April 17, 2018 in Homebuilding and Renovating Show 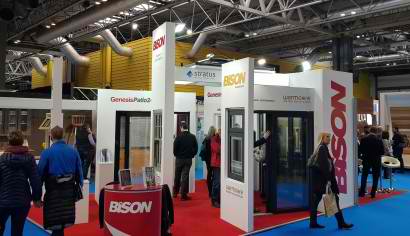 Barnsley-based fabricator Bison Frames have broadened their appeal and reach to the homebuilding and renovating market by exhibiting at the National Homebuilding and Renovating Show at the NEC in Birmingham. Following a successful exploration of the market at a regional version of the show in Harrogate last year, Bison’s directors Martyn Haworth and Mark Tetley took the decision to invest in the national show, supporting their growing Genesis Installer Network with direct leads from the public.

The high-end manufacturer demonstrated their full range of products to an audience of more than 40,000 at the four-day event. In particular their PVCu Genesis Collection – which includes sash windows, flush casements, sliding doors and bi-folding doors – and their WarmCore hybrid aluminium windows and doors, drew a lot of interest from homeowners planning renovation and extension projects on their homes.

Following the show Bison co-Director Mark Tetley commented: “We manufacture a full range of high-end PVCu and aluminium windows and doors, through our Genesis Collection and WarmCore ranges, but within the trade we’re probably best-known for our Genesis VS sash windows. However, HBR is an opportunity to demonstrate the full range of what we do directly to the public – particularly those in the process of planning homebuilding, extension and renovation projects.

“The show attracts more than 40,000 paying visitors, so you know they’re there actively looking for products and inspiration. We found that they appreciate the opportunity to get close to the windows and doors and talk to the people who actually make them, taking advantage of our knowledge and expertise in relation to their specific projects.”

Discussing visitors to their stand, co-Director Martyn Haworth comments: “Over the four days of the show there was a constant stream of people checking out our range and considering different styles and options. Many were unaware that they could have true high-end uPVC windows and doors—like those in the Genesis Collection—as a great-looking, low-maintenance alternative to timber, even in conservation areas. For those more interested in aluminium—they loved our WarmCore range, especially when they found out that it’s more energy efficient than standard aluminium.

“As a trade manufacturer we don’t install anything ourselves, but the reason we are there is to support our Genesis Installer Network with live projects from the public. Having inspected the products and made their decision, we take the homeowner’s details and put them in touch with their local Genesis Installer Network member, who takes it from there and deals with them direct. It’s simply one part of the support package we provide to trade customers and network members.”